A $20,000 Bitcoin is Possible According to This Bullish Fractal

Bitcoin is going to hit $20,000 by the end of this year, according to a precise technical pattern.

The benchmark cryptocurrency is currently trending inside a rising channel, confirmed by the formation of more than two reacting highs and lows. The price bounces off the lower trendline of the channel support to target the upper trendline, which is resistance.

Similarly, it corrects lower after testing the upper trendline to reclaim the lower one. As long as the price fluctuates inside a rising channel, its bias remains bullish. That typically follows with a breakout in the direction of the previous trend. Since bitcoin was rising before the channel’s formation, its likelihood of heading upward is high. 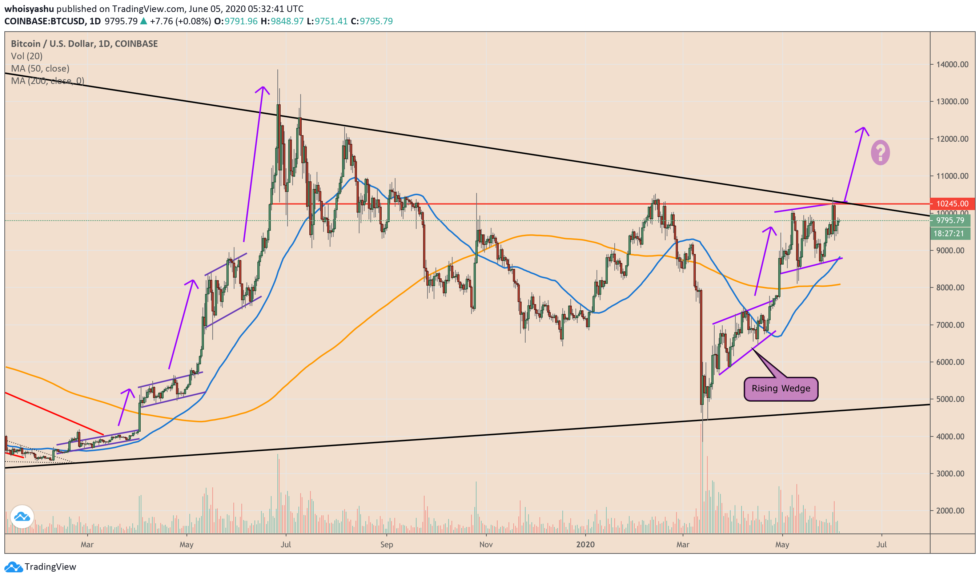 That led to a price rally that would exhaust near $14,000 in June 2019. The upside, meanwhile, formed two ascending channel patterns, each resulting in a massive breakout.

Bitcoin in 2020 is repeating a similar pattern. The cryptocurrency reversed after dipping to its yearly lows below $4,000. It then trended inside a Rising Wedge, which is, technically, a bearish indicator. Nevertheless, traders invalidated it to establish a more definite bullish bias.

The price eventually rose above $10,000 before it corrected lower to find support above $8,000. That led to a series of similar attempts. The price rose and form higher highs and higher lows, with its recent move almost closing-in towards $10,500. The fluctuation locked the price inside a rising channel pattern. 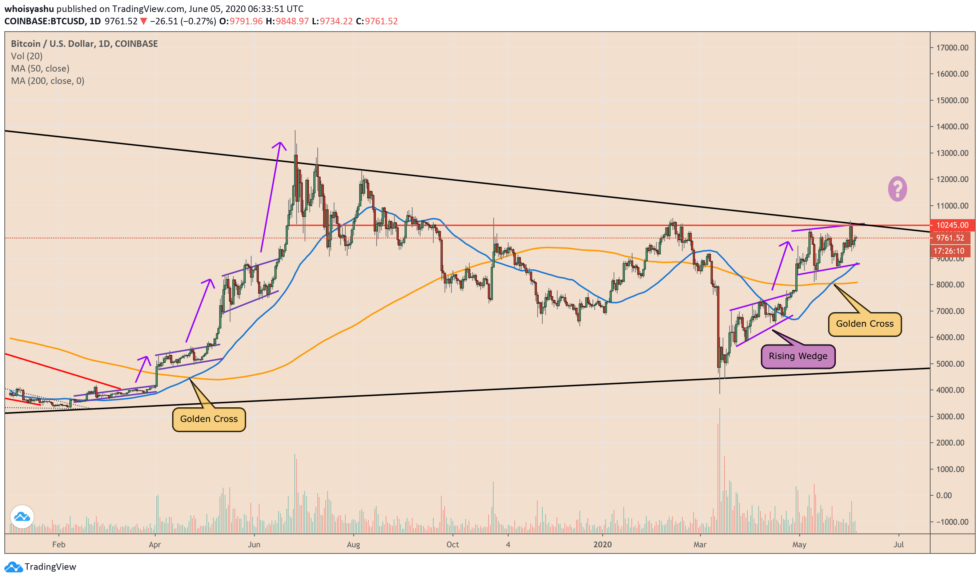 The cryptocurrency painted the same Golden Cross during its 2019 rally, right while it was trending inside the second rising channel pattern. Conjugating it with the current upside scenario also serves as a strong bullish case for Bitcoin.

The last set of rising channels, as well as the formation of a Golden Cross, helped bitcoin to surge by more than 150 percent. Meanwhile, the move uphill also appeared against a string of supportive macro indicators, such as a falling yuan, Facebook’s Libra launch, and rising U.S.-China trade worries.

Bitcoin could repeat a 150 percent price rally because of underlying fundamental and technical factors. Even today, yuan risks falling because of increasing geopolitical tensions between the U.S. and China. Meanwhile, quantitative easing from central banks around the world is making Bitcoin an ideal store of value, like gold.

“Bitcoin ended 2019 at about $7,000, near the bottom of its range, favoring a shift toward the peak,” noted Bloomberg in its latest report. “Last year, the high was about $14,000, which would translate into almost double in 2020 if rotating within the new band, and mean little in the big picture.”

AUDIO Token Worth $8M Distributed in Giveaway by Audius