A “Flash Crash” Scenario Looms Over Bitcoin; Here’s Why

Bitcoin may undergo a significant price correction before the US presidential election due to its proximity to gold, hints Clem Chambers.

The CEO of ADVFN – Europe’s leading stocks and shares website, told Kitco News that most assets that have shown a positive correlation during the 2020 bull run tend to fall in tandem. He spoke about gold and how a “flash crash” in its markets could leave other assets in a similar bearish spell.

“I got a warning from the market about ten days ago…so I cleared the decks because I think it’s highly likely, not absolutely certain, but too likely to be in the markets that we’re going to be in for a crash,” Mr. Chambers said. “Normally before a crash, I experience what I call a market malfunction where my portfolio just doesn’t behave as it should.”

The Tale of Two Safe-Haven Assets

Bitcoin laggingly tailed gold, especially since the March 2020 global market rout wherein both the assets crashed in tandem. At one point this year, the short-term correlation between the cryptocurrency and the precious metal reached an all-time high of 75 percent.

The proximity grew mainly because of a growing demand for safe-haven and riskier assets amid a bearish US dollar outlook. The Federal Reserve’s unprecedented monetary policy, which includes an open-ended bond-buying program and near-zero interest rates, lifted the appeal of cash and cash-based instruments, such as US government bonds.

Anticipating short-term low yields, investors decided to offload their dollar positions for gold, Bitcoin, US stocks, and other assets. 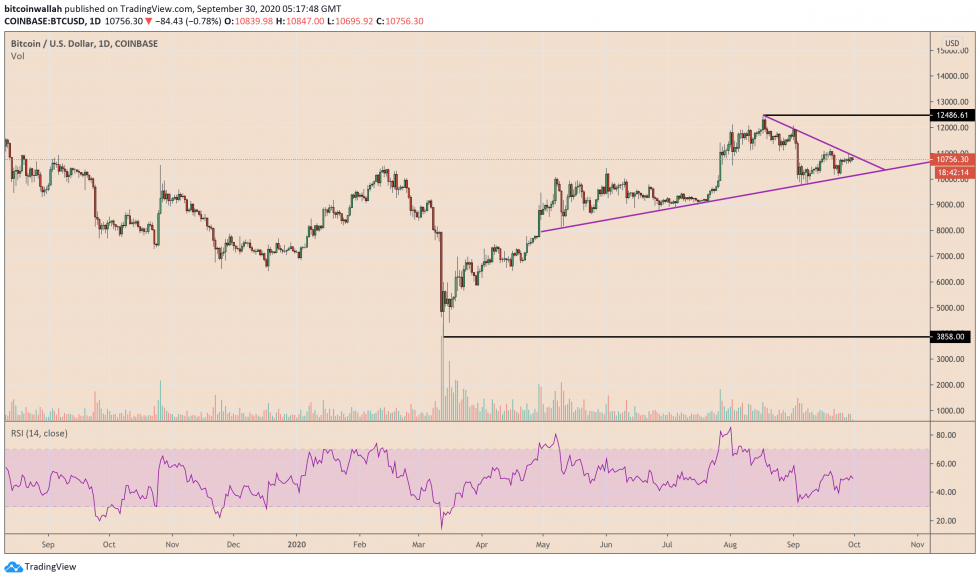 Nevertheless, the Fed warned last week that it could not continue its expansionary program without further monetary help from the US Congress. Its chair Jerome Powell requested the House to release the second coronavirus stimulus package. It is the aid that remains in a deadlock as the Democrats and the Republicans debate over its size.

Economists believe that the Congress will not be able to pass the stimulus bill before the November’s presidential election. With expectations of lesser dollar liquidity in the market, the demand for the greenback has increased among investors. On the other hand, gold, stocks, and Bitcoin have started correcting lower from their local highs.

That is where Mr. Chambers sees a “malfunction.”

But not all think on the line of Mr. Chambers, at least when it comes to the US dollar and its market bias.

Stephen Roach, the former chairman of Morgan Stanley Asia, said in an op-ed that the greenback could crash by at least 35 percent by the end of 2021, citing upticks across foreign currencies and looming macroeconomic issues in the US concerning lower savings and–again–the Fed’s expansionary policies.

“In short, the vice is tightening on a still-overvalued dollar,” Mr. Roach wrote.

The bearish dollar analogy points to more demand for Bitcoin and gold in the coming sessions. Some expect the cryptocurrency would hit $20,000 should the greenback keep falling.

35% Possibility Bitcoin is in Bearish Reversal, Analyst Explains Why

These 5 altcoins are beating every major cryptocurrency this week