Bitcoin Could See a Major Breakout in The Coming Days; Here’s Why

Bitcoin and the aggregated cryptocurrency market have seen some mixed price action as of late.

While BTC and other cryptocurrency trade sideways, some digital assets like Ethereum have been able to post breakout rallies.

Analysts believe that Bitcoin may soon follow close in their footsteps, however, as the benchmark crypto appears to be technically situated to see upside.

While speaking about this, one analyst explained that he believes holding BTC short positions is risky so long as BTC remains above $11,000.

A break below this level, however, could be enough to invalidate its technical strength and send it reeling lower.

At the time of writing, Bitcoin is trading down marginally at its current price of $11,700.

This is around where it has been trading since the slight upswing seen yesterday that allowed it to climb from lows of $11,400.

This upswing came about immediately following Ethereum’s breakout rally from $390 to $430 – indicating that investors were expecting BTC to follow.

Although it remains caught below its insurmountable $12,000 resistance level, analysts are expecting upside.

One trader pointed to Dave Portnoy’s foray into crypto as a positive event due to his massive following, which – coupled with its independent technical strength – suggests that BTC may break above $12,000 soon.

“Seems like bulls strong and Dave Portnoy buying in wasn’t a sell the news. I think we see $12K+ again, not interested to short for now, might fish dips,” he explained.

Another analyst echoed this sentiment, explaining that Bitcoin’s ability to bounce it its key support levels indicates that a push past $12,000 is imminent.

He also shares the other trader’s thoughts regarding Portnoy’s jump into crypto being bullish.

“BTC: Support held & made price bounce all the way back to the last resistance again. Going to watch how this Portnoy action into that resistance plays out, bulls are looking for a close above in the next few days. Swing shorts still only seem safe below $11k to me.” 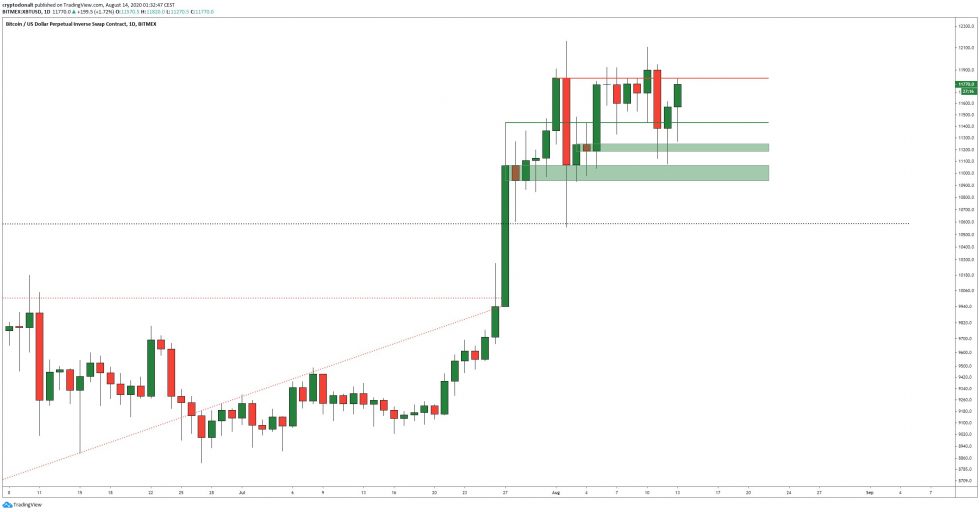 If Bitcoin does post a sustained break above $12,000, the crypto may see some significant near-term upside.