Despite the strong selling pressure that has guided Bitcoin lower and ultimately forced it down to $9,900, the benchmark digital asset’s bulls have been able to step up and stop it from seeing any massive near-term downside.

While speaking about its near-term outlook, one bearish trader explained that the weak reaction to both the $11,100 rejection and present weakness in the stock market is making him lose confidence in his short positions.

This could indicate that a break above its key resistance level is imminent in the near-term.

At the time of writing, Bitcoin is trading down just over 1% at its current price of $10,783. This marks a slight decline from its daily highs of $11,100 that were tapped yesterday.

These highs coincided with a region of immense selling pressure, as this was a previous support level that became strong resistance once it was broken below a couple of weeks ago.

Where the cryptocurrency trends next will now depend largely on whether or not buyers can reclaim this critical price region.

Trader: BTC Bears Could be Losing Strength as Stability Mounts

One trader, who was bearish on Bitcoin as its price approached $11,000, explained in a recent tweet that the tempered reaction it has posted thus far to its $11,100 resistance points to mounting weakness amongst sellers.

“BTC: Yeah.. so this was not necessarily the reaction I wanted. Weak drive down initiated solely by traditional markets. Could do anything from here on out so I’ve been reducing size a bit for a $150-$200 gain…” he stated. 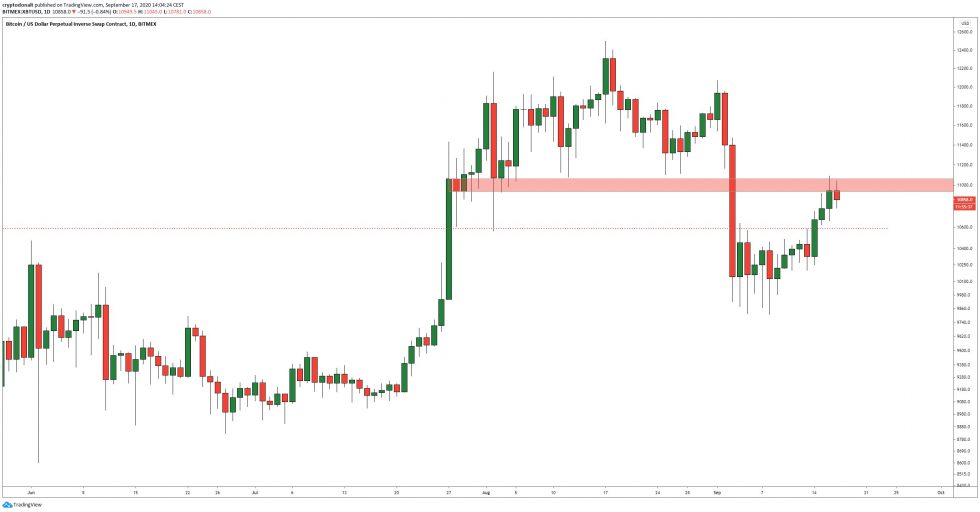 Unless bears step up and catalyze a sharp selloff in the near-term, it does appear that bulls are positioned to lay the groundwork for a push even higher.