Bitcoin saw some slight momentum yesterday that led it up to highs of $10,500 before its buying pressure faltered, and its price began drifting lower.

This led the cryptocurrency to see an influx of selling pressure that struck a blow to its technical structure, but it is important to note that it has not invalidated its short-term strength.

Analysts are still noting that the crypto is positioned to see a breakout rally. Still, it is imperative that it defends one key support level and shatters a descending trendline that it is fast approaching.

A failure to do so would be grim and open the gates for BTC to see significantly further downside.

At the time of writing, Bitcoin is trading down just under 1% at its current price of $10,290. This is around the price at which it has been trading throughout the morning hours.

Yesterday, bulls stepped up and propelled the benchmark digital asset to highs of $10,500 before it lost its momentum and witnessed its price plunge down towards $10,200.

This decline was somewhat intense and suggested that bulls don’t have enough strength to catalyze a sustainable move higher.

The $10,200 region has been strong support throughout this turbulence.

While looking towards Bitcoin’s technical outlook, one analyst explained that the cryptocurrency is rapidly approaching the apex of a technical formation that has been established throughout the past few weeks.

As seen in the below chart, it is being guided lower by a descending trendline, and rapidly approaching the apex of where this trendline meets its $10,000 support. 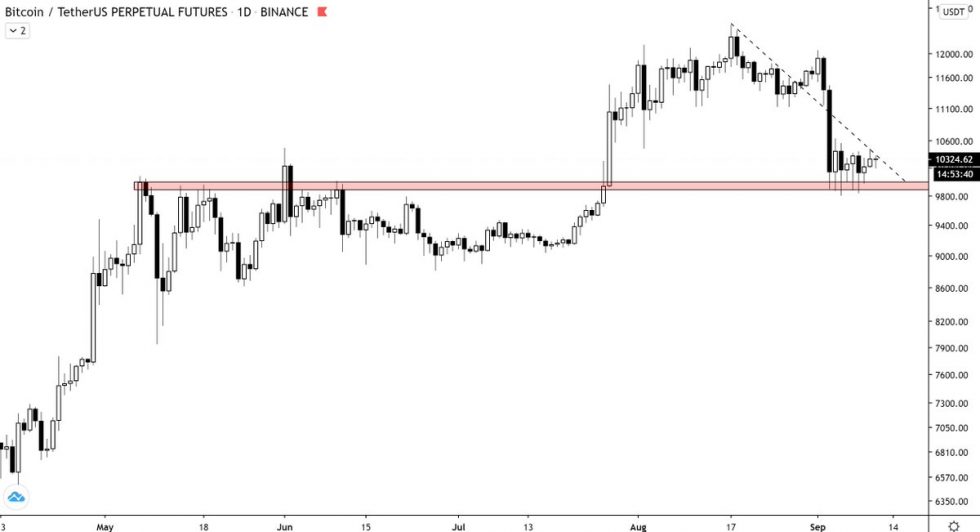 For Bitcoin to see further momentum in the near-term, bulls must continue defending the cryptocurrency’s key support at $10,000 in the days and weeks ahead.