Bitcoin and the aggregated crypto market are continuing to show few signs of having any underlying strength as buyers struggle to catalyze any intense upwards momentum.

It is important to note that BTC bulls have defended against any intense downside on multiple occasions throughout the past few days.

This does appear to be a subtle sign of strength, but it is possible that its near-term support around $9,000 is growing weaker with each test.

Analysts are now forecasting that Bitcoin will see further weakness in the months ahead. One trader is claiming that summer could be a corrective period for the benchmark cryptocurrency, meaning that it could soon post massive losses.

At the time of writing, Bitcoin is trading up just under 1% at its current price of $9,360. The cryptocurrency has been trading at this level for several weeks, struggling to garner any clear directionality.

It does appear that this consolidation phase has resulted in it forming a weak technical structure, as BTC has consistently been setting lower highs ever since it first rallied up to $10,400 a few weeks ago.

As for what this means for where the crypto could go after its sideways trading comes to an end, analysts do believe that downside is imminent.

One respected pseudonymous trader explained in a recent post that he plans to scale into short positions between $9,500 and $10,100, with a downside target sitting at $8,500. 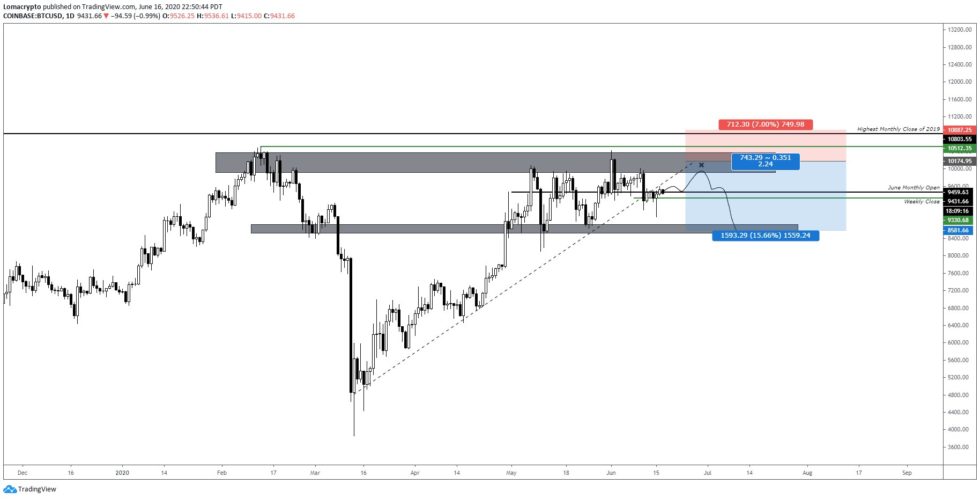 Here’s Why the Summer Months May Be Corrective for BTC

Another analyst recently explained that a confluence of different factors seems to suggest that a decline throughout the rest of summer could be imminent if buyers are unable to catalyze a massive upside movement next month.

“BTC monthly: With or without a final rally, the remainder of the summer seems to be for a correction. Either July becomes a May ’19 like rocket candle (or inverse Nov ’18 like). Or, if not, I think we’ll sell-off to 6K range throughout summer. Still long – waiting for movement,” he explained.

The longer Bitcoin trades sideways, the more likely it is that the next movement will be massive and define the crypto’s trend for the months ahead.