After consolidating at $9,300 for an extended period, Bitcoin bulls were able to fuel a second leg up that allowed it to reach highs of just under $9,600.

This movement came about after an extended bout of sideways trading following the asset’s recent break above its trading range between $9,100 and $9,300.

Where BTC trends next now depends on its reaction to $9,500. If bulls can flip this level into support, it could catalyze significantly further momentum that sends it to its next crucial resistance level at $10,000.

A break below this level, however, could catalyze a sharp downtrend.

At the time of writing, Bitcoin is trading up marginally at its current price of $9,500. This marks a notable climb from the asset’s recent low of $9,100 that was set just a few days ago.

The latest surge higher came about after bulls were able to flip $9,300 into a support level.

Analysts are now noting that the crypto remains in firm bull territory so long as buyers continue defending this support level.

One analyst specifically pointed to rising open interest and positive funding as two factors to consider, adding that buyers must continue defending $9,300.

“BTC Funding back to mostly positive across most swap exchanges. Open interest took a nice hop up the last two days. Better keep it above 9300 folks, nothing is certain,” he explained.

BTC Could Be Gearing Up for a Significant Push Higher

Another analyst recently explained that he believes Bitcoin is now well-positioned to push significantly higher.

He specifically is looking towards a test of the crypto’s local highs, which exist somewhere between $10,000 and $10,500.

“BTC HTF Update: Hard not to be bullish here, as long as buyers defend this $9500 level for the rest of the week ahead, I think we will be seeing a retest towards the local highs. No possible way to see this as bearish right now, LTF seems to show $9500 as S/R flipped,” he said. 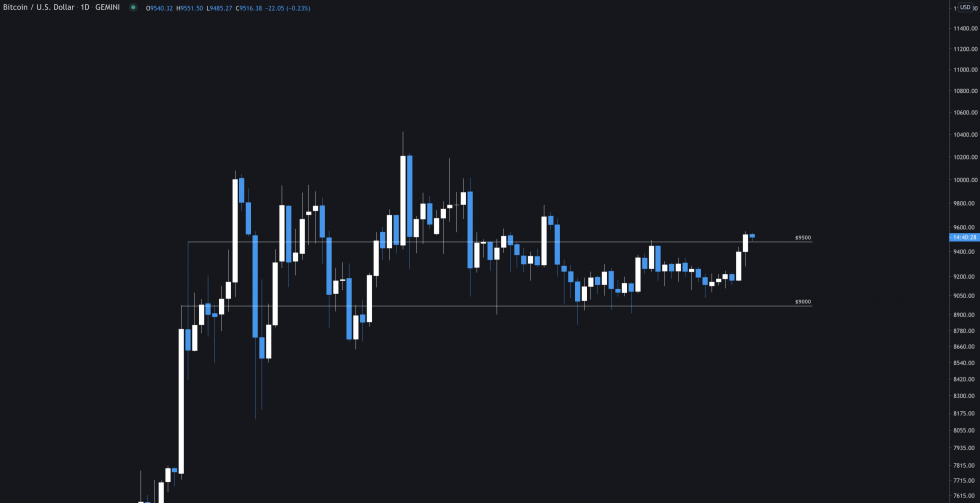 The coming few days will be critical for better understanding Bitcoin’s mid-term outlook.