A new 2020 crypto outlook report from Bloomberg has been released, revealing just how bullish the company’s analysts are on Bitcoin.

The report puts a spotlight on the first-ever cryptocurrency’s digital scarcity and suggests that the current active addresses point to prices closer to $12,000 in the short term.

Bitcoin and the cryptocurrency asset class is only just over ten years old, but it’s already being put to the ultimate test.

The very fabric of its design will either prove its value now or face falling into obscurity.

Bitcoin was designed by Satoshi Nakamoto with digital gold on his mind. He sought to make an asset that shared the best features of gold but could exist digitally, outside of the reach of third-parties.

These attributes, including digital scarcity, and a thriving network of active addresses, are all underscored in a new report from Bloomberg. 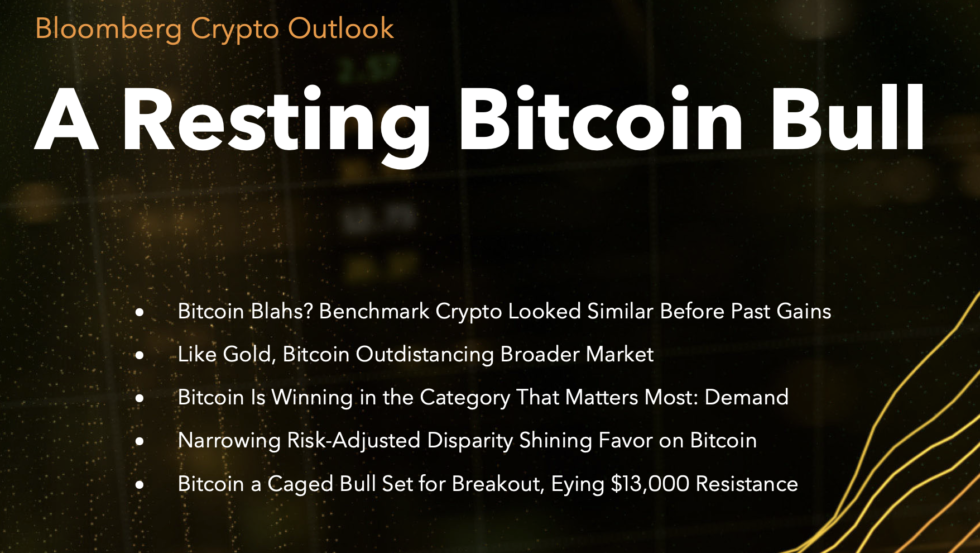 Bloomberg researchers are growing increasingly bullish on the first-ever cryptocurrency. The current global economic environment is the perfect recipe for the asset’s price to climb higher, according to the brand.

Bloomberg researchers believe that the low volatility in the asset transitioning from a speculative asset to digital gold. Volatility recently reached lows compared to major stock indices like the Nasdaq.

The report also claims that based on active Bitcoin addresses, fair market value is closer to $12,000 for the leading cryptocurrency by market cap.

Data sets also show that Bitcoin is maturing and volatility is decreasing compared to the stock and commodities markets. A comparison with crude oil, Bloomberg says, demonstrates “nascent technology designed to increase in fiat-currency terms vs. the primary commodity that’s deflationary and redundant.”

They further conclude that Bitcoin is a “caged bull set for a breakout, and claim the asset is eying resistance at $13,000.

Breaking through that level would allow the cryptocurrency to attempt a retest of its former all-time high. This peak was set back at the height of the crypto hype bubble at $20,000.

But what do Bloomberg researchers think about altcoins? They suggest that the “oversupplied crypto market has little chance of appreciation” without a Bitcoin bull run.

With Bloomberg essentially claiming a new Bitcoin bull run is just about here, the entire crypto space could once again see soaring prices.