Bitcoin and the aggregated crypto market have seen some turbulence throughout the past few days. BTC has been unable to claim a sustainable position above $11,000, while most other altcoins continue descending lower.

It is important to note that the state of the market now depends on where BTC trends next, as it will likely have far-reaching impacts on Ethereum and other altcoins.

One trader explained that as long as Bitcoin holds above roughly $10,000 for the weeks and months to come, it could be well-poised to see some significant upside.

That being said, $11,100 remains a pivotal level that must eventually be broken above, as a failure to do so could result in it seeing intense losses.

Over the past couple of days, Bitcoin has been attempting to garner a foothold within the lower-$11,000 region.

This region has long been a strong resistance zone for the crypto, and this is continuing to hold true as its price remains beneath this region.

At the time of writing, Bitcoin is trading down just under 2% at its current price of $10,900. This is around the price at which the cryptocurrency has been trading throughout the past few days and weeks.

Analyst: Bulls Remain in Control of BTC if It Holds One Key Level

While speaking about the cryptocurrency’s near-term outlook, one analyst explained that bulls remain in firm control of it so long as it stays above $10,000.

He also notes that in order for its macro strength to persist, it must break $11,100.

“Trend is bullish as long as it is above the purple box – this dump could be seen as a ‘higher low’.” 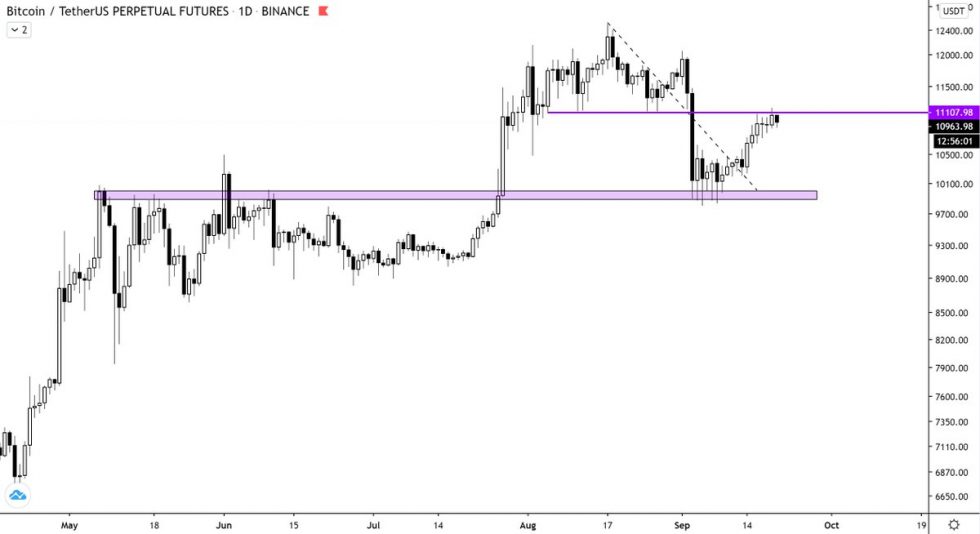 Whether or not altcoins can continue seeing parabolic momentum in the weeks and months ahead could depend almost entirely on Bitcoin’s eventual reaction to these two key levels.