Bitcoin’s price is back above $11,800 after a sharp fall last week into the weekend. However, even a $1,000 rejection wasn’t enough to shake the market out of its extended state of greed.

According to a sentiment measuring index, the cryptocurrency market has reached its longest stretch of extreme greed ever. The record was set, just as a famous Warren Buffett letter from 2000 resurfaced, meant to act as a reminder to be fearful when others are greedy.

If you’ve spent any amount of time in investing or trading at all, chances are you have come across a famous Warren Buffett quote whether you realize it or not.

The “Oracle of Omaha” as he’s called, is known to be one of the greatest investors ever to live. Buffett also followed a rather simple philosophy: buy assets with long-term value.

He also was an advocate of contrarian investing, and among his most famous quotes advises investors to “be fearful when others are greedy” and to be “greedy when others are fearful.”

The quote suggests that when markets are exuberant with recent gains, it could be a signal a correction will follow. And its always when things get the scariest in markets when assets begin to reverse and recover.

Sentiment is tricky to gauge. Much of it is gut instinct, but if bullish comments dominate bearish ones by a large margin, that information could be telling. To assist crypto traders with a better understanding of where market sentiment is, a “Fear & Greed Index” was developed.

Wise Words From Warren Buffett On How Greed Is Blinding

This tool, after the recent Bitcoin rally and altcoin season, has reached its longest stretch of extreme greed ever at a full month. And it could be a sign that its time to be fearful, as Buffett advises.

In the past, the tool, pictured below, has reached a higher point. But even during that previous extended phase of extreme greed, it wasn’t concurrent, with moments of falling back into more modest levels of greed. There were also moments when greed spiked higher, however. 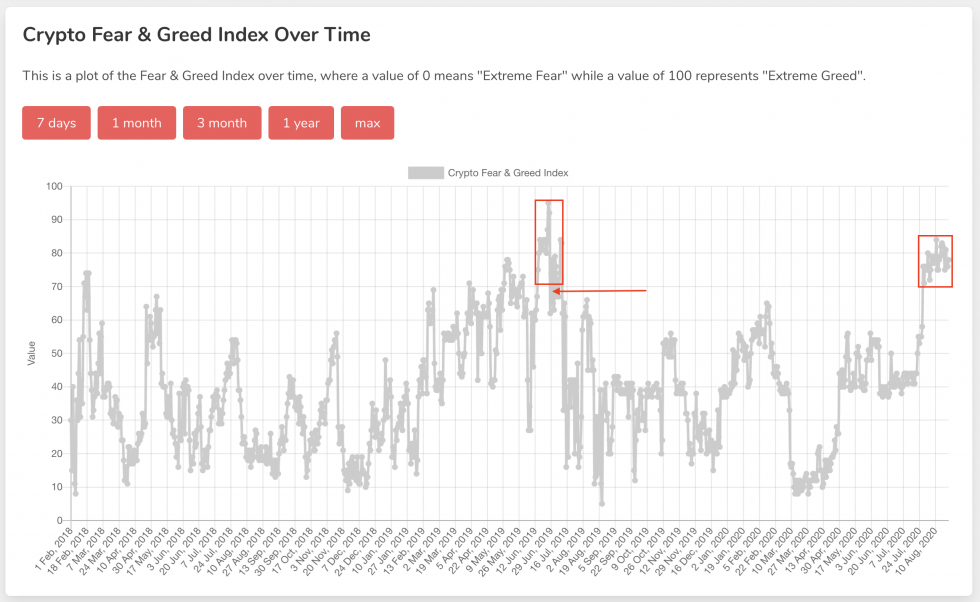 This nearly one full month of extreme greed in the crypto market comes after the total market cap is up over 90% year to date. It also has arrived alongside a revival of another famous Buffett quote.

“The line separating investment and speculation, which is never bright and clear, becomes blurred still further when most market participants have recently enjoyed triumphs,” Buffett wrote in a shareholder letter from 2000. “Nothing sedates rationality like large doses of effortless money.”

Along with the crypto market being up over 90% year to date, the market has grown over 230% from the Black Thursday low. Billions of dollars have been added during this time, just waiting for investors to begin taking profit and securing the paper gains that they are greedily salivating over.

When that profit-taking begins, and after such a large rally, things could head back into extreme levels of fear rather quickly. And just like a sign that extreme greed was the moment to be fearful when things get scary again, it may be time to buy.