Ethereum‘s Breakout Rally Suggests Bitcoin is Poised to Explode Past $12,000

Ethereum is currently showing signs of strength as it pushes up towards $350. Bitcoin has closely followed its uptrend, as the benchmark crypto is now pushing up towards its resistance in the mid-$11,000 region.

This ETH rally has come about following an extended period of consolidation within the $330 region, and analysts are widely expecting it to push up towards, or even past, $350 in the near-term.

This could prove to be extremely positive for Bitcoin as well because the benchmark cryptocurrency is continuing to track ETH’s general trend.

One analyst is even noting that it could help lead Bitcoin past $12,000 in the days and weeks ahead.

At the time of writing, Bitcoin is trading up just under 1% at its current price of $11,200. This marks a notable climb from daily lows in the upper-$10,000 region that were set yesterday.

Its overnight surge came about close on the heels of that seen by Ethereum, which hovered within the $330 region for a couple of days before pushing as high as $346 earlier this morning.

One analyst recently pointed out that BTC is closely tracking Ethereum’s price action, which – for the time being – is playing into bull’s favor.

He concludes that ETH’s present strength could guide Bitcoin up towards $12,000.

“Is ETH leading Bitcoin again… If so, I think Bitcoin sees $12k soon,” he said.

It does appear that Bitcoin is approaching a key hurdle that buyers will need to surmount if they want to catalyze further strength.

Its ongoing upswing towards these levels, however, may be bolstered by its ability to confirm $10,900 as support earlier today.

“And $10,900 indeed turned support. Crucial hurdle; clearing this level and I think we’ll see another slight rally towards $11,500 to close the gap on the CME charts,” one analyst observed. 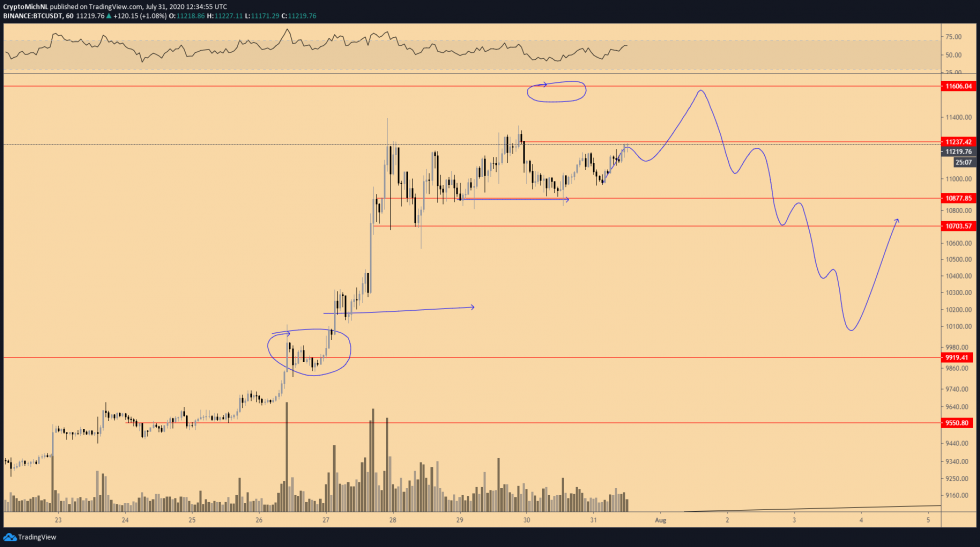 How the market trends in the coming hours should offer greater insight into the implications of the connection between Bitcoin and Ethereum.