Bitcoin and the aggregated cryptocurrency market are currently stabilizing following the strong uptrend seen throughout the past few days.

Although BTC has been unable to test its high time frame resistance within the upper-$9,000 region, it is showing some immense signs of strength as it gains a foothold above $9,500.

This level has been confirmed as resistance on multiple occasions, so the break above it does point towards strength amongst buyers.

Analysts are now noting that they expect Bitcoin to see a pullback in the near-term, with a test of its support potentially catalyzing another leg higher.

Bitcoin Shows Signs of Strength But Remains Below Key Resistance

At the time of writing, Bitcoin is trading down marginally at its current price of $9,530.

BTC has been hovering around this price level throughout the past day, struggling to garner any momentum despite its overt strength.

The support and stability it has found here is certainly a positive sign, but analysts are now noting that there is some heavy selling pressure at $9,600 that may slow its ascent.

While speaking about this level, one popular analyst stated that a break above this resistance would lead BTC to see a sharp rally up towards its local highs at $10,000.

“BTC HTF Update: Entered back into the upper section on the HTF range, as long as we main support at $9500 I feel happy to have my bias shifted towards bullish. $9600 next key resistance. Breaking and flipping $9600 would take us above previously local highs, feeling confident.” 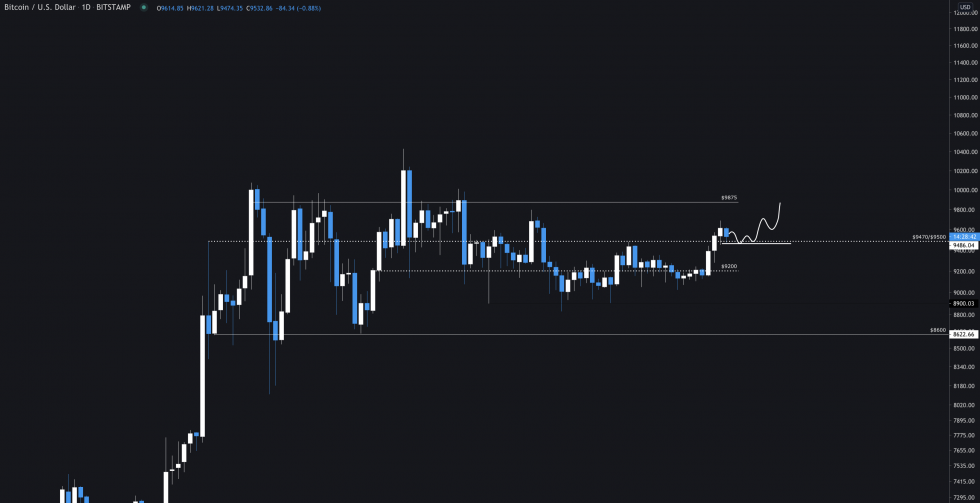 BTC May Reel Towards $9,200 Before Pushing Higher

Another respected analyst explained that the resistance Bitcoin is currently pushing up against may continue proving to be insurmountable.

As such, he notes that he is expecting it to pullback towards $9,200.

This will be the level at which he opens fresh long positions due to it being the daily demand level and the weekly open.

“Bitcoin Pull all the way back to $9.2k (daily demand + weekly open) and I’d gladly long it,” he explained. 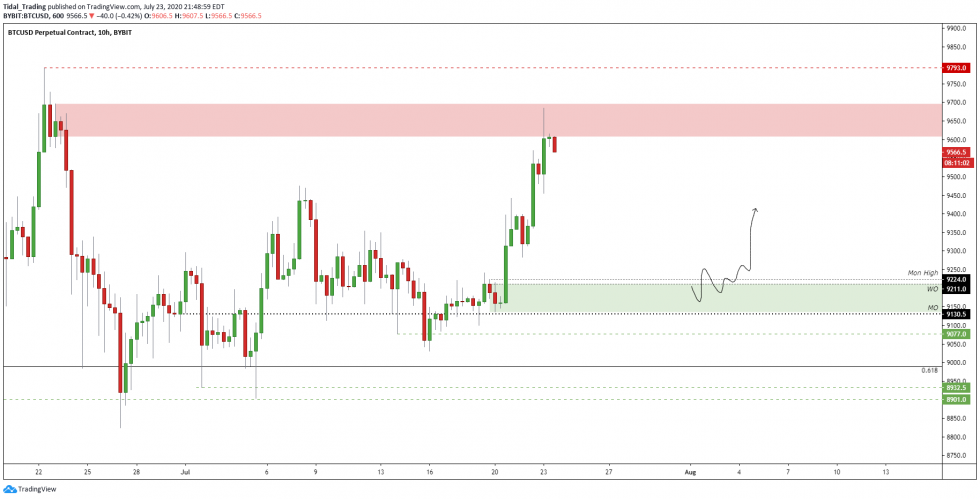 Unless buyers see a surge of support that propels Bitcoin through $9,600, it will likely see a drawdown in the near-term that ultimately allows it to push higher.