Last Time This Metric Was This High, Ethereum Reached Its February High

Ethereum’s price action over the past few months has undoubtedly been impressive. Shaking off the crash in March, the asset has gained 80% in the past month alone as the network’s fundamentals have seemingly become bullish.

An analysis by Jon Geenty of Coin Metrics, a blockchain analytics and data firm, though, may suggest that a high is near.

He shared the image below on August 18th. It shows Bitcoin’s macro price action, Ethereum’s price action, and a specific ratio of prices.

According to the ratio, the crypto market is nearing an “inflection point.” Last time this ratio was this high, the crypto market topped in February. The time before that, the price of Bitcoin and Ethereum consolidated for a number of weeks before heading higher. And the time before that was when Bitcoin and Ethereum reached peaks in the 2017-2018 crypto bubble.

“We are entering an interesting period for an indicator looking at new highs less new lows as a percentage of total assets – seeing levels seen only at major inflection points in the past… [This is] still significant as in the past this has signaled both large bullish and bearish moves.” 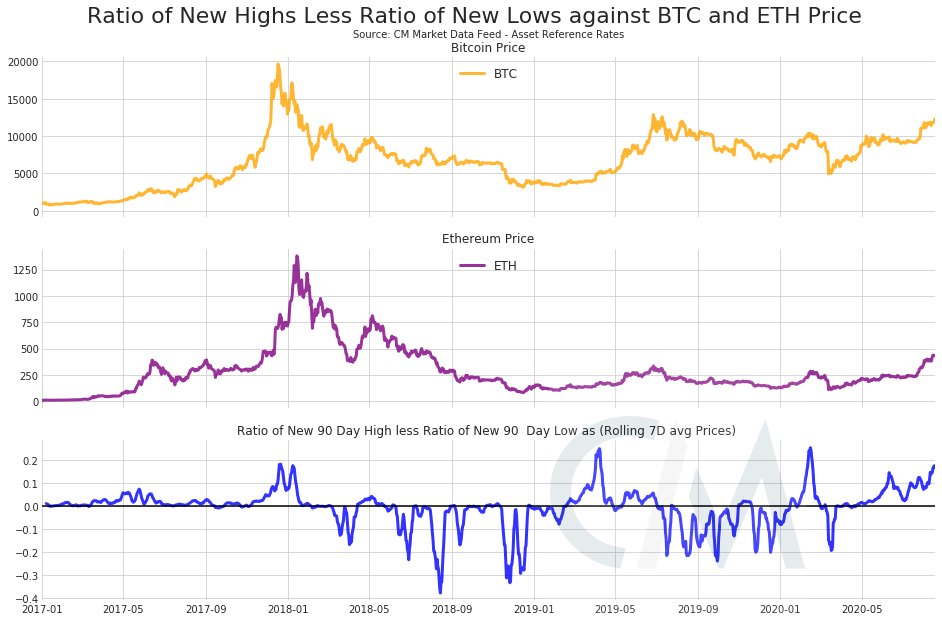 Should history rhyme, ETH and BTC may soon plunge from their highs, potentially after pushing a bit higher.

The fundamentals of the Bitcoin, Ethereum, and crypto markets, though, are still favoring bulls.

On Bitcoin, in particular, analysts have identified a staggering confluence of reasons to be optimistic about BTC’s prospects. Prominent Bitcoin proponent “Vortex” recently shared four of these reasons:

Of course, these aren’t directly reasons to be bullish on Ethereum. But as is the norm, ETH follows the price action of the market leader on a macro basis.