Bitcoin price is appreciating at full steam because the market consists of nothing but buyers at the moment. Those who already own the abundance of the currently circulating supply are holding strong and refusing to sell. However, data shows that nearly 20% of the entire circulating supply hasn’t moved in seven years. Are those coins held by the strongest holders yet, or are there other reasons the large share of BTC supply hasn’t moved in so long?

Bitcoin is struggling to get back above $50,000 currently, but it might not be long before it does so. The available supply of BTC on cryptocurrency exchanges is at an extreme low, and what little supply is available is being bought by institutions at a rate of 13,000 BTC per week on Coinbase Pro alone.

Corporations are buying BTC by the thousands, planning to hold the volatile asset as an alternative to cash reserves at risk of inflation. Those that do buy into Bitcoin, typically do have a plan to hold for a set amount of time, or have a certain price in mind.

Most crypto believers and financial analysts who understand the asset’s digital scarcity expect the price per BTC to reach hundreds of thousands by the time the current bull cycle is over. With investors knowing this, they’re not selling at any price below it. Miners have been selling, but even that has begun to dry up. 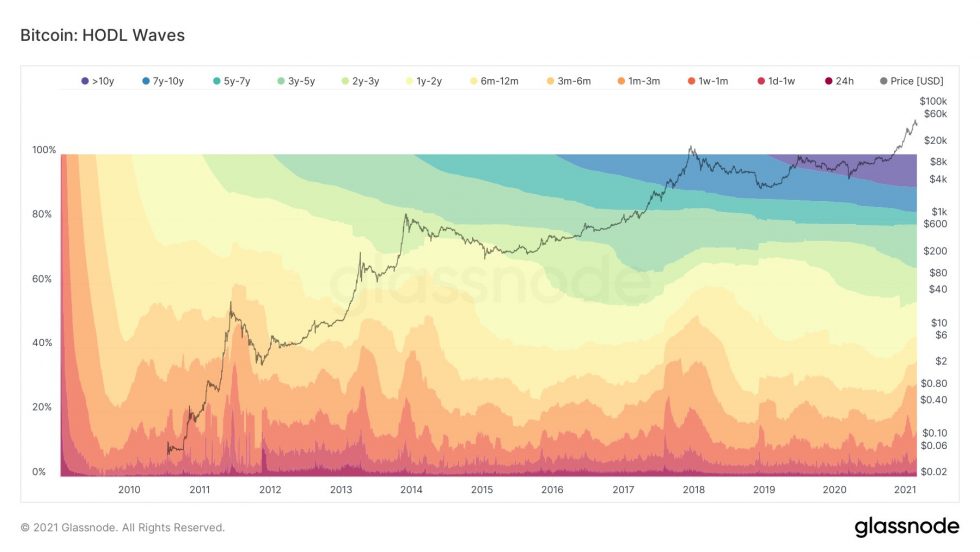 Still, the ultimate goal with Bitcoin for most participants is to try to sell as close to each top as possible, taking as much profit as they can. That makes the holding threshold roughly four years or less.

However, data shows that as much as 17.87% of the circulating Bitcoin supply has been held for as long as seven years or more. But why?

Lost Bitcoin, Or The Strongest Holders Crypto Has Ever Seen?

At some point during that time, the cryptocurrency would have gone through two bear and bull cycles, and appreciated from $1,000 or lower to now $50,000 per coin.

Perhaps those holding these coins are poor at timing the top, and end up getting stuck holding on the way down. Maybe they’ve got a long term plan or price point in mind, and after seven years it still hasn’t been reached.

The most likely answer, however, is that these coins are lost – forever. A sizable portion of those holding seven years or more, have actually been at it ten years or more. The longer the coins have been held, the more likely the chance they’re locked away and inaccessible.

Even Satoshi’s coins, spread among wallets said to contain more than 1M BTC, haven’t moved in that long and could be gone forever. In the rare event that the coins are still accessible, after seven or more years of price appreciate, are bound to be worth a fortune.