This Newly Formed Structure Could Cause Bitcoin to See Major Losses

Bitcoin rallied up to highs of $11,500 overnight before facing an influx of selling pressure that slowed its ascent.

The cryptocurrency is now trading just above its crucial support at $11,000.

Although buyers have been in firm control of Bitcoin throughout the past few weeks, ever since it posted a rejection at $12,000, its momentum has been slowing.

This may indicate that it needs to undergo another consolidation phase before it can push higher.

One pattern resulting from this recent price action is quite bearish, suggesting that the benchmark crypto could be poised to see notable downside.

Buyers tried to spark a fresh leg higher yesterday, but only led BTC as high as $11,500 before it lost its strength and reeled lower.

This is the second firm rejection seen in the past several days – the first being BTC’s massive selloff seen when it tapped $12,000 on Saturday evening.

Analysts are now noting that the cryptocurrency could be well-positioned to see further near-term downside.

While speaking about this possibility, one trader said that the selloff recently seen at $12,000 is not “momentum to disregard.”

“I expected a stronger Monday session for BTC to be bullish, disappointing, it even dumped late Western session hours before the close. We dumped over 1’500$ [on] Sunday after tapping 12.2k, it’s not momentum to disregard, could very well be rolling in our faces.” 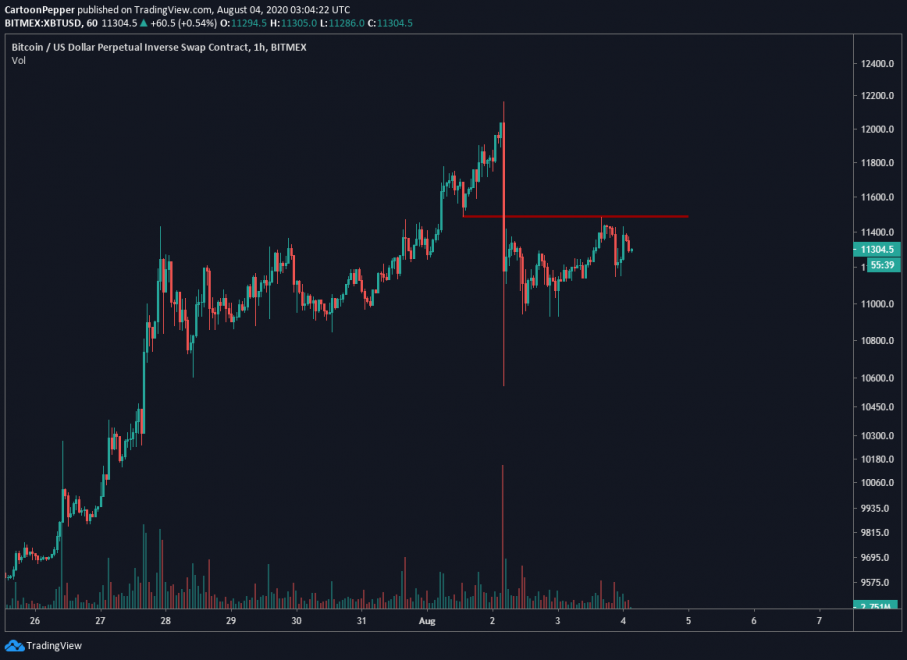 Here’s What Could Work to Invalidate This Weakness

Bitcoin is in a precarious position now, but the tides may quickly shift back into buyers’ favor in the coming days.

The same trader later noted that one development that could invalidate the sentiment he shared is a $120 million Tether mint that just took place.

He even went so far as to note that this fresh stablecoin supply could help propel BTC significantly higher.

“Closed my BTC short on 11,110$: woke up to a 120MM$ tether mint, which changes my [perspective] altogether: new highs much more likely just because of it IMO. Side lined for now.”

How Bitcoin trends throughout the coming couple of hours as its daily close approaches may provide investors with greater insight into its near-term trend.