Why Bitcoin Just Surged to $13K in Belarus Amid Massive Protests

Belarus has become a hot ground of the great Bitcoin experiment as the country dwells into one of its most disturbing civil crisis.

Ask prices for the world’s leading cryptocurrency by market capitalization are going higher across peer-to-peer platforms. Data fetched from Paxful, a Bitcoin marketplace, show people demanding a $2,500 premium for one unit of the cryptocurrency. While the rates differ from one seller to another, the average Bitcoin price as on Friday stands near $13,000. 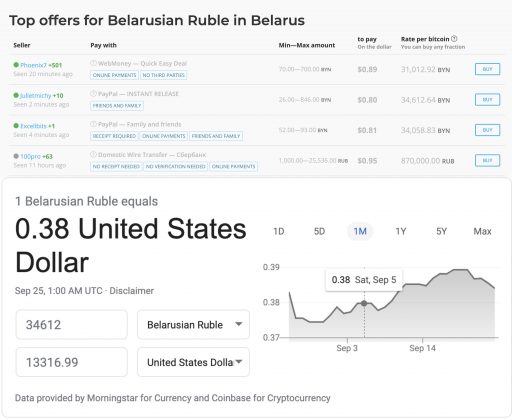 Belarus is now in the middle of a severe political and civil unrest. The country’s armed strongman Alexander Lukashenko has been sworn in as a recurring president amid ongoing mass protests against his 26-year dictate.

The 66-year old politician took the oath this Wednesday in a secret ceremony even as the people of Belarus and a section of global leaders called the elections that voted him to power “fraudulent.” Since then, hundreds and thousands of citizens have joined voices on the streets for his resignation.

Meanwhile, the ongoing political turmoil has left the Belarusian economy in a sad state. According to local reports, people have started withdrawing money from their bank accounts en masse. Meanwhile, blue-collar workers are going on strikes and IT companies are planning to migrate elsewhere.

“In the weeks since the 9 August presidential election, Belarusians have flocked to banks to withdraw their ruble deposits and convert them into dollars and other hard currencies,” reported Belarus Digest, a local daily.

The future looks meager, as well. Economists anticipate the Belarusian economy to suffer further as its central bank runs out of liquidity to support the national banks. Meanwhile, a lack of trust in the government would keep downside pressure on the Belarusian Ruble. It could happen as more and more people move out of the country or park their capital elsewhere.

It is the same period that has seen Bitcoin growing against the Belarusian Ruble, that too, by premium rates. That signals a massive shift towards the cryptocurrency as the civil unrest grows.

Pieces of evidence also come in the form of new Bitcoin-enabled initiatives in Belarus. A local nonprofit, BYSOL​, for instance, is currently helping people who were expelled from duties for protesting against the Lukashenko regime by paying them in Bitcoin. The group has raised about $2 million in donations so far.

Cases such as these also hope to alert other protestors about Bitcoin and its significant role in protecting themselves against any form of government-led crackdowns. That partially explains why its rates on Belaurisan p2p marketplaces went higher this week.

Bitcoin is up 50 percent on a year-to-date timeframe against the dollar. Source: TradingView.com

BTC/USD was trading at $10,694 at the time of this writing in the US markets.