Why Bitcoin May Need to Test $11,000 Before Climbing Higher

Bitcoin is showing some slight signs of strength today as its price pushes towards $12,000, with this momentum coming about following a prolonged period of weakness.

This strength also came about close on the heels by the movement seen by Ethereum that sent it from lows of $388 to highs of nearly $410.

It’s possible that BTC will mirror this move and continue pushing higher in the near-term.

That being said, one analyst is noting that he is still expecting Bitcoin to reel towards $11,000 in the near-term.

Bitcoin Climbs Towards $12,000 as Market Rebounds

Following a prolonged period of trading around $11,600, Bitcoin is finally starting to gain some slight momentum that has allowed its price to rally higher.

This latest push higher has led the crypto one step closer to its key $12,000 resistance, but it has yet to test this level following the recent break beneath it.

In the near-term, one factor to closely watch is how Ethereum reacts to the momentum it incurred overnight.

This momentum allowed it to climb from under $390 to nearly $410, and it has yet to post any clear rejection at these highs.

Because ETH has recently been guiding the market, it is possible that Bitcoin will soon follow in its tracks and break above $12,000.

One analyst believes that Bitcoin will continue struggling to garner clear momentum so long as it fails to tap its key near-term liquidity region at $11,000.

He doesn’t expect a break above $12,000 until this level is tapped.

“BTC update: Still pretty clean, price keeps retesting resistance on the way down. Once one of these actually gets broken I think there is a good chance $12100 gets tested again, I wouldn’t bet on that happening though. $11000 remains the main draw in my opinion.” 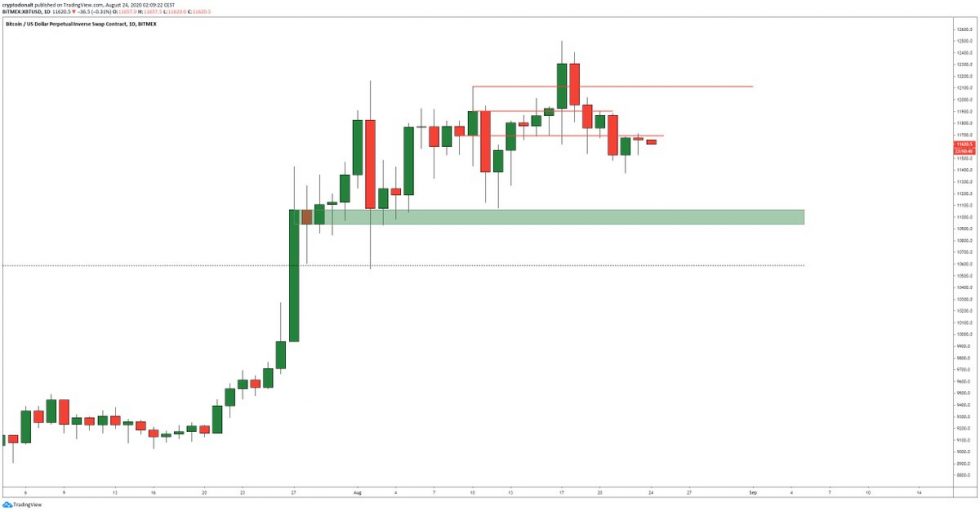 The coming day should offer significant insight into the long-term significance of Bitcoin’s ongoing push higher.